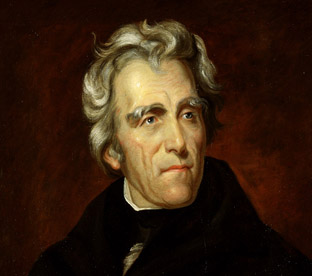 “If one drop of blood be shed in South Carolina in defiance of the laws of the U.S., I will hang the first of the nullifiers I can get my hands on.” He went on to say he would do so on the first tree he could find. And what is also important to note, only the stupid doubted he would do so.

Yes, hard to imagine why a U.S. president who spoke so eloquently (wink) could be the first one ever targeted for assassination.

On January 30, 1835 not one but two unsuccessful assassination attempts against President Andrew Jackson occurred. Jackson was attending a funeral when lone assassin Richard Lawrence came up to him and fired a pistol at point-blank range. Bang! The weapon misfired. Attempt #1, no good. Now this assassin did not have a repeating carbine pistol (Colt was just getting around to producing its “revolver”) and had to toss his one-shooter aside and pull out another, and do so before anyone could react. Miraculously, Lawrence was able to pull another pistol and fire, but it too misfired! According to witnesses, President Jackson proceeded to beat the man over the head with his cane.

So, what are the odds of such an event? Not one, but two shots are fired, and both are lame. No one intercedes, no bodyguards or soldiers? And interestingly enough, Jackson, who was known to have killed, only beats Lawrence some before he is taken away. Also, Lawrence was later deemed insane, institutionalized, and never punished for his assassination attempt.

Thus was the first assassination attempt ever against an American President.

Tell this to a class of 16 and 17 year olds, and watch the conspiracy theories fly!

[Note: There was an incident that occurred before the above after Jackson ordered the dismissal of Robert B. Randolph from the Navy for embezzlement, who then sought revenge by attempting to punch the President.]