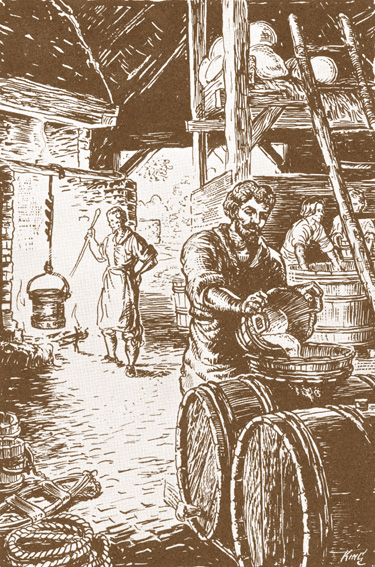 This short essay will show how the principles of the American Revolution spawned a new era in American society as seen through the prism of the manufacturing and consumption of alcohol in North America. Additionally, how those Enlighten concepts of the Revolution impacted the society.

By analyzing the American Revolution’s impact on alcohol distilleries, the change in consumption habits of Americans, and the evolution of law in regard to alcohol, we can see how the Revolution radically altered American society after the war. More specifically, we can see how the radicalism of the Revolution in terms of how it changed the social structures of the family and the community, its enlightened concepts of freedom and authority, is expressed in the changes within the distillery industry and American consumption habits.

The post-American Revolutionary period saw sweeping changes in society and on multiple levels. As historian Gordon S. Wood noted, in the years after the Revolution “what remained of the traditional social hierarchy virtually collapsed.” The generation that spawned the Revolution, Wood also noted, “hoped to destroy the bonds holding together the older monarchical society – kinship, patriarchy, and patronage” and replace them with the enlightened ideals of “virtue” and a “disinterested public leadership.” In their attempt to transform American society, the Founders did succeed in creating the “most egalitarian, most materialistic, most individualistic” society in the Western world. These ideas of social and political liberalism would impact all aspects of society.

Amid this egalitarian and individualistic society emerged a reliance on the virtue of the individual and the relaxing of stringent Colonial laws on alcohol production and consumption. As we know, when the Pilgrims arrived in 1620 they consumed alcohol, specifically beer, on a daily basis and no laws existed to its consumption and production. However, it did not take long before the government of American Colonies, such as in Massachusetts, began heavily regulating and taxing the manufacturing and consumption of alcohol.

In their effort to radically create their utopia, Puritans themselves eventually attempted to halt the consumption of spirits. Much like a modern totalitarian state, Puritan communities were heavily regulated so that every aspect of life was controlled, including the use of “fire water.”

CHRONOLOGY OF THE AMERICAN BREWING INDUSTRY

1587 Virginia colonists brew ale using corn.
1607 First shipment of beer arrives in the Virginia colony from England.
1609 American “Help Wanted” advertisements appear in London seeking brewers for the Virginia Colony.
1612 Adrian Block & Hans Christiansen establish the first known brewery in the New World on the southern tip of New Amsterdam (Manhattan).
1614 The first non-native American is born in New Amsterdam, (perhaps the first non-native American male born in the New World) in Block & Christiansen’s brewhouse. Jean Vigne grows up to become the first brewer horn in the New World.
1620 Pilgrims arrive in Plymouth in the Colony of Massachusetts aboard the Mayflower. Beer is extremely short on board ship and the seamen force the passengers ashore to ensure that they will have sufficient beer for their return trip to England.
1632 The West India Company builds a brewery on Brewers Street in New Amsterdam led by Governor Van Twiller.
1633 Peter Ninuit establishes a brewery at Market Field on Manhattan Island.
1634 Samuel Cole is the first to be licensed in Boston to operate a tavern.
1637 First authoritatively recorded brewery in the Massachusetts Bay Colony under the control of Captain Sedgwick.
1639 Sergeant Bauleton is placed in charge of a brewhouse in Providence, Rhode Island.
1670 Samuel Wentworth of Portsmouth obtains the first license to brew beer in New Hampshire.
1683 William Penn’s colony erects a brewery at Peonshury near Bristol, Pennsylvania.
1683 William Frampton erects the first brewery in Philadelphia on Front Street between Walnut and Spruce at the Dock Street Creek.
1734 Mary Lisle, the first known “brewster” in America, takes over her late fathers Edinburgh Brewhouse in Philadelphia, which she operates until 1751.
1738 Major William Horton builds the first brewery in the deep south at Jekyll Island, Georgia.
1754 George Washington enters a beer recipe in his notebook.
1762 The Theory and Practice of Brewing by Michael Combrune is published. This is the first attempt to establish rules and principles for the art of brewing.
1765 The British Army builds a brewery at Fort Pitt (Pittsburgh, PA). The first brewery west of the Allegheny mountains.
1765 A brewery is built in the French colonial settlement of Kaskaskia in what is now Illinois. It is the first brewery outside the 13 colonies.
1772 A mixture of dark to light malts called “Porter” is concocted in England. Exports begin to America but it fails to gain popularity.
1774 Robert Smith begins a modest ale brewing venture at Saint John & Noble Streets in Philadelphia. Through relocations and buy outs, the Robert Smith brand will survive until 1986 – 212 years.
1774 The Single Brothers Brewery and Distillery opens in the Noravian religious settlement of Salem, North Carolina.
1775 Revolutionary War measures by Congress include rationing to each soldier one quart of Spruce Beer or Cider per man per day.
1789 George Washington presents his “buy American” policy indicating he will only drink porter made in America.
1789 Massachusetts passes an Act encouraging the manufacture and consumption of beer and ale.

Government, as it would do often, intervened in not just the consumption of alcohol but also its production including taxation. For example, in 1677 a Massachusetts’s court “established a regulation according to which beer might only be prepared from good barley malt.” Not producing beer with such quality would result in fines. Beer brewing, the type of barley used, the process of brewing beer, the locations for selling beer, and the quality of the beer itself, was all regulated by laws. People could be fined, flogged, and imprisoned for violations. Not to mention, taxes levied on beer brewing and consumption began in earnest and as a result of this government regulation, eventually the brewing and consumption of beer would come to a near halt by the outbreak of the American Revolution. Americans drank rum and tea in much high quantities than beer in 1700s because of regulation and taxes.

But all this would change with the Revolution. Though Americans were still devout Christians, they clung to the ideals of the Enlightenment and the philosophies of Natural Law, individual freedom and virtue. These ideas impacted the distilling industry and the private consumption of alcohol in America. Gordon S. Wood acknowledged that the “Revolution became a full scale assault on dependency” on patronage, radically restructured the family hierarchy, and just as important the role of government.

The idea of government regulating things such as the quality of the barley used in brewing, the location of beer breweries, as well as declaring how many pints of beer was legal to consume, would have seemed overbearing by the generation of Americans after 1776. Post Revolution Americans favored limited government and Natural Law, and at the very most would have allowed state and local governments to handle such issues, and with the consent of the people. It would not be until the radical era of Progressive Liberalism in the early Twentieth Century when government officials once again intervened in pre-Revolution ways with legislation such as the Eighteenth Amendment.

The spirit of the American Revolution led to government actually enacting legislation to promote alcohol consumption. None other than Thomas Jefferson and James Madison “were [both] decidedly in favor of the promotion of beer-brewing…” Additionally, in almost every United States Congress during the “two decades after the adoption of the Constitution, measures were considered and adopted which were intended to promote beer-brewing…” Also, the number of distilleries boomed during the decades after the Revolution, “reaching a peak of 20,000 by 1830,” by comparison the number never exceeded 5,000 during the 1700s.

By 1809 consumption of liquor amounted to, on average, a little over 23 quarts a year per person. Up from 10-15 during the Colonial era. The increased consumption of alcohol was due to decreased regulation and enforcement of laws, the ease of taxation, and the growth of American beliefs in individualism and freedom. With this new found freedom, Americans by the 1830s were on average consuming five gallons of liquor per year. This also led to the creation of our Republican government, but as we know it also led to the ease in regulation of things such as the consumption of alcohol and it also led to other developments unintended, but in hindsight not surprising.

By the 1820s American Society seemed to be “coming apart,” as virtually every state saw an increase in “murder, suicide, theft,” and alcoholism. Some have argued that the “burden” and “expectations” of the new American Republic led to an increase of anti-social behaviors when perhaps the opposite is true? Consider that the new found freedoms, the loss of patronage and the withering of stringent religious and government controls threatened to turn their country into a “nation of drunkards,” according to the Delaware Moral Society in 1815. It was not the burden of freedom, but freedom itself that led to self-indulgence.

The America that exited the 1700s was a youthful, confident, and somewhat naive nation that had a lot of figuring out to do and would struggle with the meaning and nature of revolutionary ideas. What is also evident is that the production and consumption of alcohol, the evolution of legal restrictions or lack thereof, gives us, though somewhat limited, an insight into those Revolution ideas and their impact on American society.