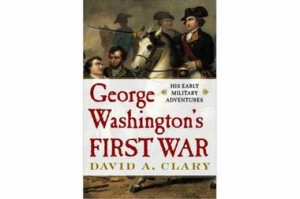 George Washington was a brash, self-confident, driven, and often daring and dashing young man, he was also at times indecisive and prone to make a bad judgment call or two. David A. Clary’s George Washington’s First War: His Early Military Adventures is a well balanced presentation of a young Colonel Washington who cut his teeth on the back-country of Virginia and the Ohio Valley, the future speculator and Revolutionary war hero thrived on achieving personal advancement and success. Washington earn some of what he wanted, but ultimately realized he could never get all of it as a “provincial” member of the British Army.

However, controversy did surrounded the young commander, such as the massacre of French soldiers near Tanaghrisson by Mingos after they had surrendered to Washington. Yet, by the end of his journey during the French and Indian War, and his heroic leadership during Braddock’s blunder, and the retreat, Washington had gained the confidence and learned what true leadership was.

George Washington’s First War: His Early Military Adventures is an excellent read and an insightful look at the growth of an American legend, though as the author notes, he was just a boy who became nothing more than just a man.