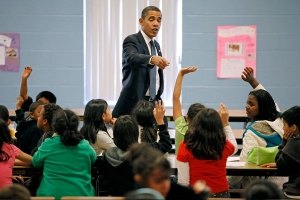 The headlines recently stated: “Obama calls for less standardized testing” and “Obama says too much testing makes education boring”. Yet No Child Left Behind legislation that mandates all the standardized testing is still in place! Not sure where I am on this as I kind of agree with the President that we are so focused on teaching to tests that we take the exploratory nature of history (and learning) and throw it away. This also goes for AP Testing as well. But recently I had a discussion with my Principle who told me they no longer care about AP scores and want maximum enrollment; meaning to slow it down and reduce the work. The reasoning? The more AP students there are the higher the graduation rate. I think I am finally on board with this and am freed from the driven system of go-go-go. I am going to next year stop and, if you will, smell the roses. Allow for my student to do some deep exploring with historical topics. I have had to cover an incredible amount information and it, indeed, takes the fun out of it. Yet, I do understand those who say we need to measure learning and success.

As an educator in a public school the day Obama was elected there was much adulation that this would mean the end to NCLB (No Child Left Behind). Most teachers (and the Union), it seems, voted for him because they believed he would reverse the NCLB legislation of George W. Bush and the Republicans. According to current NCLB legislation, 100 percent of students had to be proficient in reading and math by 2014. When this first came out, pure astonishment by us public school educators. But, we hunkered down and are doing our best. From the rural communities of Colorado to the inner cities of Chicago, NCLB is not achieving the success it so promised. You can either blame the educators, the system, or the students, I guess. One article even describes it as Obama’s War on Schools.

As one journalist noted,

The theory behind NCLB was that schools would improve dramatically if every child in grades 3 to 8 were tested every year and the results made public. Texas did exactly this, and advocates claimed it had seen remarkable results: test scores went up, the achievement gap between students of different races was closing, and graduation rates rose. At the time, a few scholars questioned the claims of a “Texas miracle,” but Congress didn’t listen.

A recent study showed that 216 Vermont Schools Fail To Meet Federal Standards. The consequences could be school closings. In fact, Eighty-two percent of schools in the U.S. are not meeting the NCLB standards. Indeed, not even close, and inner-city school districts are perhaps feeling the most heat.

As 2014 nears, tens of thousands of schools have been stigmatized as failures, thousands of educators have been fired, and schools that were once the anchors of their communities are closing, replaced in many cases by privately managed schools. NCLB turns out to be a timetable for the destruction of public education.

With the economy in such dire straights and with the political gridlock in Washington, it is doubtful that anyone will have the political will to truly tackle the issue. Yes, recently, U.S. education secretary called for overhaul of No Child Left Behind. With a Republican dominated House of Representatives don’t count on any significant change to NCLB. And that disappoints me, I was one of those cheering that the Democratic Congress and President would do away with NCLB and fast. BUT, they did not!

So the question, Has Obama Betrayed Educators and Teacher Unions?, is valid but missing the mark. Frankly, I doubt there will be any serious movement on this. I don’t want to throw billions of dollars at it again, it never sticks and the test scores never really change.