Urban Combat in the Civil War 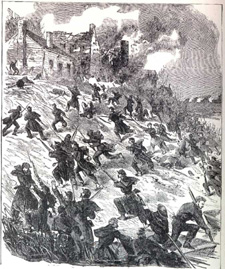 Urban engagements during the Civil War were no doubt few and far between, but were there enough to justify some study? The only one that comes to mind is Fredericksberg. I do know of a couple small engagements, but really not a lot else. The reason I ask is there seems to be a void (and maybe for good reason) concerning urban combat during the Civil War. A couple of things: 1) How did this type of combat affect the soldiers?; 2) How did civilians adapt and were there civilian casualties as a result; and perhaps even some atrocities committed by troops engaged in the street-to-street fighting. But once again, there may simply not be enough out there to justify any kind of scholarly study.

I did find this (below) concerning Fredericksberg, which describes a little of the urban combat that took place. I’ll pick up the narrative after an intense artillery barrage on the city:

When night descended, the flames of burning houses still lit up the landscape, and though the continuous roar of the batteries was hushed, a sullen gun at intervals resembled the horse growl of a wild animal who retires with reluctance from his prey. The result of this bombardment was cruel, and the scenes which followed it sufficient to excite the sensibilities of the most hard-hearted.  Men, women, and children had been driven from the town ; and hundreds of ladies and children were seen wandering homeless and without shelter over the frozen highway, with bare feet and thin clothing, knowing not where to find a place of refuge. Delicately nurtured girls, upon whose frail forms no rain had ever beat, and whom no wind had visited too roughly, walked hurriedly, with unsteady feet, over the various roads, seeking some friendly roof to cover them. Whole families sought sheds by the wayside, or made temporary shelters of fence- rails and straw, knowing not whither to fly. Such were the cruel results of the cannonade. Night had settled down ; the shattered houses were visible only when the flames of the burning buildings soared up suddenly as they caught some new object ; and the enemy held the place. Barksdale had fallen back, fighting from street to street until he reached the suburbs, where, posting his troops behind a stone wall, he held his ground, and no further attack was made on him.

The author was far more appalled by what was happening to the civilians because he was a Confederate, but still the impact of urban warfare was certainly devastating for the civilian population. We see this with the siege warfare around Vicksburg and towards the end of the war around Richmond.

I kept looking and started to find some small engagements where urban combat was fairly intense, like this fight in and around August, Kentucky in 1862 that involved Rebel cavalry, a small union force, and a gunboat:

From every window our true and trusty boys were firing, and for one half-hour the leaden hail was doing its work of death ; rebel after rebel was made to bite the dust, while our boys, thus secreted, were fighting for their homes and firesides. But what a scene now followed! The houses in which our forces were posted were set on fire, the cannon of the enemy was planted in our streets, and, disregarding the women and children, they were firing shell into the houses. Yet, true to their work, the little band of Union men fought on until it was madness to try to hold out longer.

If there are any other fights that you are aware of that involved some urban warfare please let me know!

6 Responses to Urban Combat in the Civil War