How will the Recent Unrest in Wisconsin be Remembered?

President Obama, after winning the White House in 2008 proclaimed that “Elections have consequences.” But perhaps we should place an asterisk there and add “Democratic victories only” have consequences. Wisconsin elected a Republican and he is doing what Republicans do. How uncivil for these protestors to not accept the verdict! I wonder if they will be treated like the Tea Party Protests were in the wake of the Obama Election?

Wis. Gov. Scott Walker is attempting to address a serious budget issue in Wisconsin, one of many states that are frankly broke. Wisconsin is $3 billion in debt. (By the way has he once blamed his predecessor?) Among numerous things, the state is simply asking state employees pay a little for their own health care (could care less about the impact on the Unions); as they pay nothing. I’ll repeat that: nothing. I pay almost $700 a month for health care (not complaining by the way, think everyone should pay for their own care.) As a teacher I took a pay cut last year. Did I protest? No. Happy to have a job. And remember, the Left is supposed to be the party of compassion and caring. I don’t see how not going to work and its impact on the children displays their compassion. Do these teachers realize if Walker gives in and does not cut spending he has already told them 20,000 state employees lose their jobs?

I watched the protests this past week in Madison, Wisconsin, and I was stunned by the lack of civility, especially after the shooting in Arizona where the Left found it very easy to blame the Right and preach about needing a “new discourse.” Here’s some of the new civility the Left is delivering: 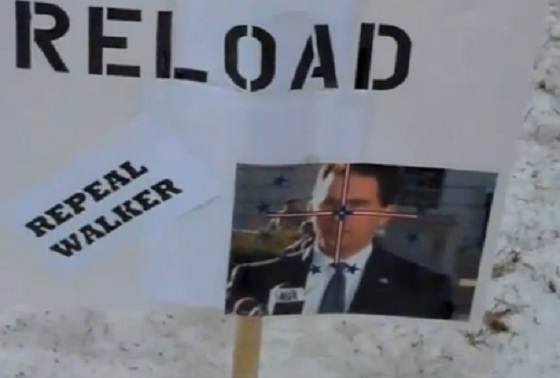 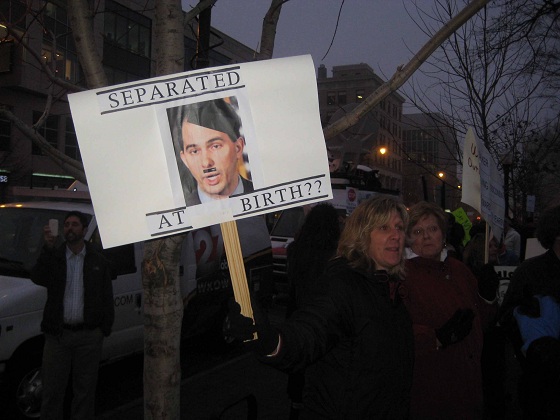 Some areas of the news are calling the unrest in Wisconsin and elsewhere a “Progressive Revolution.” The Progressive Era Part Two.
MSNBC host Dylan Ratigan seemed to suggest just such a thing. “Are things in our country so bad that it might actually be time for a revolution?” Ratigan asked. “The answer obviously is yes,” he added, and “the only question is how to do it.”

Salon.com has an article proclaiming Why FDR would support the Wisconsin protests, and of course he would. Just look at his New Deal legislation.

I think what is happening in Wisconsin represents the decline of American Exceptionalism (if it even still exists.) State employees having to help pay for their health insurance, my God. Teachers calling in sick so they and their students can protest. These are tough times.

So instead of students being in school and learning in Wisconsin, they are in the streets carrying signs of SOLIDARITY. What does this teach them?

I have no doubt some will report the growing unrest of Unions and the protest over spending cuts as a worker’s unite kind of progressive movement.

Now, a bit of hyperbole on my part? Sensationalism? Sure. Those are but a handful of idoits in the crowd. But the question still stands, How will the unrest in Wisconsin and perhaps elsewhere be remembered?