Isolationism, The Myth of the Founders? 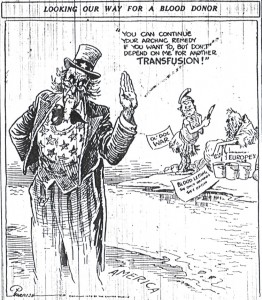 With so much talk recently of the United States’s involvement in the Middle East and how it violates our Founding principle of “isolation,” I had an interesting discussion recently with my students concerning the historical theme “Isolationism.”

The debate centered on whether or not the United States has always been an isolationist nation? On the surface it is very easy to show cause and effect and change over time with regard to American foreign policy.

But seeing that we are expected to teach (here in Colorado, at least) “Isolationism” as a foregone conclusion, the question stands, “Isolationism, The Myth of the Founders?”

If we first consider George Washington’s Proclamation of Neutrality (1793) and his belief that United States should act”friendly and impartial” towards any “Belligerent Powers.” Washington was being prudent, if you consider the year you know that the United States is but a fledgling nation having just created a Constitution and Bill of Rights. It was struggling to maintain itself. Though his cabinet was somewhat split on who to support in the European conflict between England and France, the road to Neutrality was the obvious one, to be sure.

As President Washington signed the first American Neutrality Act (1794), he seemingly established the tradition of isolation. Moving forward to Washington’s Farewell Address and his appeal to the Nation to keep America’s involvement in “permanent alliances” to a limit, “which to us have none or a very remote relation,” and recommend a policy “to steer clear of permanent Alliances,” the case seems closed.

And, if that does not solidify the argument in favor of America being an “Isolationist” nation, Thomas Jefferson followed up Washington proclaiming that “peace, commerce and honest friendship with all nations,” was the goal and to avoid “entangling alliances with none.”

However, as should be noted, neither Washington nor Jefferson had any understanding of “Isolationism” as the word had not yet made it into the English vernacular. Both would arguably have issues with suggesting that the United States be “isolated” from Europe. Both looked to expansion in the West and the continued immigration of Europeans to their “Empire of Liberty” for settlement.

And Jefferson, as was his way, proved to be the enigma as he would send the U.S. marines to “the shores of Tripoli” to rescue Americans kidnapped by Barbary (Muslim) Pirates and to protect American commerce. He would unconstitutionally purchase the Louisiana Territory, an expansion that guaranteed the United States would probably be involved in foreign affairs. Jefferson, in particular, wanted the continued importation of European culture — hardly the stance of an ideologue bent of isolation.

From our involvement as a fledgling colony in the first World War (Seven Years War) to our ideological involvement in the first world crisis after independence: the French Revolution. Perhaps “Isolationism” is but a myth.

The United States of the late 18th and early 19th centuries could not afford an active role in foreign affairs, and perhaps had never intended to be as “isolationist” as we teach our students on a yearly basis.

2 Responses to Isolationism, The Myth of the Founders?